Swinging Back To New York In Spidermans Latest DLC: The Heist

Everything may look familiar when I swing back into Insomniac's SpiderMan's first of a 3 part DLC titled "The Heist", but it is a good excuse to pick up that controller and take to the New York skyline again. The Heist offers more of the same thing that Spider-Man did: a smattering of fun, quick open-world activities, coupled together with a more character-focused storyline. Not to say that you shouldn't play the game again, as the DLC focuses more on the core strengths of what made the game so great and builds upon that.

That story is what really makes The Heist interesting, as the rest is just open-world window dressing to take advantage of Spider-Man's solid systems. After being teased in the main game, Spider-Man's old friend-slash-former-lover-slash-semi-nemesis Black Cat is back in town. She's both up to no good and potentially in trouble, since her arrival coincides with the resurgence of a mafia crime family in the wake of Spidey's removal of the Kingpin at the start of the main game. 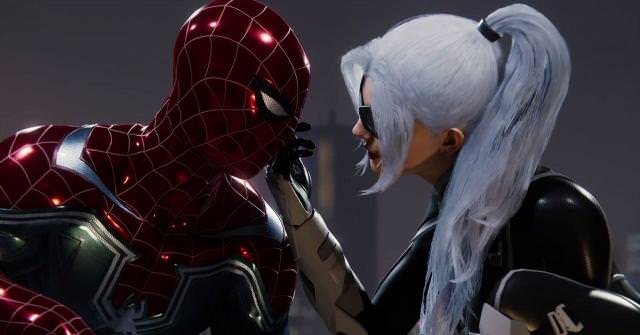 True to the games roots, the story feeds of off the personal connection between Spidey and Black Cat. They have a deep, rooted history together and from the beginning it clouds Peter's judgement. The relationship between Pete and MJ is already complicated--and that was before his ex showed up and started robbing museums. To make matters worse, it seems Black Cat has aligned herself with the mob, which makes her more dangerous and puts her in more danger as well as messes with Peters head. Mission by mission, the best part of The Heist is watching Peter grapple with how he feels about Black Cat and what exactly her return means for his life going forward.

Aside from the deeply personal story between Spiderman and Black Cat, the other parts of the DLC are great as well. it's not all a rehash of the main game's glories. The story missions offer some great, refreshing takes on elements that have shown up in Spider-Man before, like an opening museum heist in which Spidey has to save the art from grabby mafiosos, or a later tag-team scenario in which Spidey and Black Cat stealth-beat down a bunch of bad guys. Insomniac capitalizes on just how well-designed Spider-Man is, and these ideas are especially engaging when they're added to the unfolding story.

This may not keep the season vet's of the Spiderman universe around for long, but it definitely is a refreshing and fun way to take back to the streets of New York the only way the web slinger knows how to. Kicking butt and taking names.

The following 2 users like this article: Wosley , Calculus
1 comments