Well that didn't last very long. Epic Games released a patch earlier today, version 6.30, that mainly addresses one of the most controversial additions in months -- the ability to re-deploy your glider after jumping from a 4 ramp height or above. 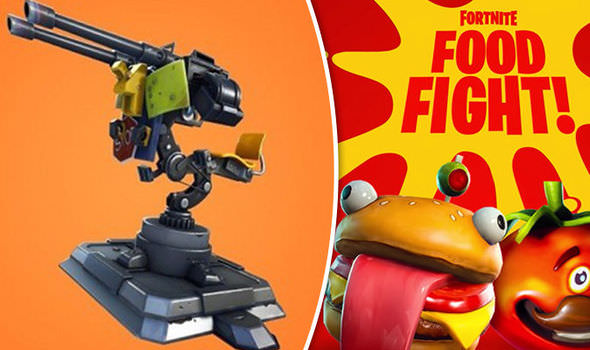 The developer had used their 'beta card' when the feature was announced for release in patch 6.20, stating that they are effectively "testing how providing a singular mobility mechanic that all players can use will affect regular gameplay." Being that it was always scheduled as a test addition, the numbers may favor support towards re-deploy staying in the game and we'll see it in regular game modes again in the future. Luckily for those that did support the addition, it will still be available in certain Limited Time Modes such as Soaring 50s and Disco Domination, as well as Playground Mode.

The recent update also introduced a new Limited Time Mode called Food Fight. The LTM pits Team Durrr Burger against Team Pizza Pit in a battle of the food restaurants, with each time attempting to destroy the other restaurants mascot located on the main buildings.

The battle of Durrr Burger versus Pizza Pit has begun. Two teams on either side of the map. A huge barrier runs down the middle. Build a fort to protect your restaurant mascot. When the Barrier lowers, destroy the enemy’s mascot to win the match!

An impassable barrier will be spawned along the center of the map for the first several minutes.
Each team will have an under-construction restaurant near the center of the map. Inside is a giant mascot head representing that team.
If the mascot head is destroyed, that team loses the match.
Teams should use the time that the barrier is up to construct a defensive fortress around their restaurant.
As soon as the barrier lowers… fight to take out the enemy mascot before they destroy yours!
Special red Supply Drops spawn at the start of the match. These hold a handful of weapons, ammo, consumables, traps and a few hundred metal building materials.
Players will respawn after 7 seconds when eliminated, keeping their inventory.
Eliminated players spawn a percentage of their ammo upon elimination, as well as 30/30/60 wood/stone/metal materials.
100% extra resources are gained from gathering.
Building resources found on the ground increased from 20 to 50 per instance.
No explosive weapons or items are in this mode.

Port-a-Challenges no longer spawn below terrain.
Weapons + Items
Mounted Turret added (Legendary Trap)
Found in Floor Loot, Supply Drops, Vending Machines, and Supply Llamas
Unlimited Ammo, but will overheat if fired too often.
Can only be placed on floors.
Damage the Mounted Turret by shooting it directly or by destroying structural support.
The floor piece it is placed on is invulnerable.
Once placed, can be used by any player regardless of team affiliation.
When a vehicle passenger uses a Grappler, the movement has been smoothed out by retaining more vehicle momentum.
Pickaxe damage against players has been increased from 10 to 20.

Adjusted Assault Rifle shell ejection settings to prevent the shells from obstructing reticle while firing while aiming down sights.
Balloons now have proper audio and visual effects if several are popped simultaneously.
Fixed an issue in which players could take damage when leaving a Quadcrasher while using Balloons.
Fixed Quadcrashers being movable by walking into them.
Gameplay
Quadcrashers spawn rate has been increased to 100% from 50%.
Gamepad Bindings; Changing the default gamepad config from Combat Pro to Builder Pro. Updating the default custom bindings to match Builder Pro instead of Combat Pro.
Emoting, bandaging, shield potion usage and other movement cancellable actions can now be used while affected by Chillers.
Damage numbers will now show up in the starting island.
Players will take damage, but not go below 1 health.
Local damage effects like screen shake will not play.
No quest progress will be gained for damage done in the warmup lobby.
Better handling of effects when players fire short bursts of fully automatic weapons like the Submachine Gun.
Tracers and firing sounds will be more consistent.
Added a new “Reset Camera” action on the Nintendo Switch that can be bound that brings the camera to the horizon.
Unbound by default.
This gives players with motion controls an easy way to reset their camera location.
The time a player is in the Down But Not Out state before being eliminated has been increased from 50 seconds to 60 seconds.

Glider Redeploy will now only activate the Glider.
Skydiving will no longer be available when using Glider Redeploy.
The Skydiving state will still be activated when jumping from the Battle Bus, using Launch Pads, or any type of Rifts.
If Skydiving from Launch Pads or Rifts, the forced Glider deploy height has been raised from 15.5 meters to 35 meters.

Improved lobby performance and memory usage on Switch.
Optimized animation performance. Animation now operates with a fixed time budget, and will dynamically adjust quality and update rate based on load.

Glider and footstep audio for out of sight players is now more accurately spatialized.
Added hit notification audio when damaging vehicles from a distance.
Added ‘wind’ audio cue for players traveling through the air, including yourself.

Added an indication of already completed secrets to the Hunting Party Challenges.
Fixed an issue where the jersey number could get reset when changing the style on a sports Outfit with selectable styles.

Updated unlock text for the pink variant of Scales to correctly state that it unlocks at Battle Pass tier 74 instead of tier 59.
Updated the “Herald’s Wand” harvesting tool to indicate that it is reactive.

Fixed an issue where spamming the Play button on the Replay Browser would cause an error.
Fixed an issue where the close button would become inactive when loading out of date replays.
Quad Launcher explosions no longer reset when scrubbing during replays.

The primary quick bar is now visible when spectating a player.

Honk button added to extra buttons in the HUD Layout Tool for all your vehicular honking needs.
Elimination feed can now be relocated in the HUD Layout Tool.
The auto-pickup weapons and auto-open doors options will now be defaulted to off for new players.
App icon now fills to the edge on newer Android versions.
UI now accounts for the notches in the display of the Pixel 3 and Pixel 3 XL.
Enabled shader cache on the Pixel2XL to address memory issues.